A true staple in Québec, Maple Fudge (aka sucre à la crème) is a smooth, creamy and sinfully decadent maple treat that tastes like pure heaven.

Another unavoidable classic in this household on Christmas Day would be Maple Fudge, or what we Québécois refer to as “Sucre à la Crème“.

A true staple here in Québec, this fudge is a smooth, creamy and sinfully decadent maple treat that tastes like pure heaven. Just one bite is all you need for your taste buds to think they have died and gone up there to sing in unison with the angels in the sky.

Seriously… I can’t even begin to tell you how exceptionally good this stuff is.

The thing is, though, it can be a bit tricky to make, especially if you want to get it “just right”… You need to boil your cream and sugar to just the right temperature and then let it cool down and beat it to just the right consistency… This can take a bit of practice, and sometimes, too, a little bit of luck, I think.

Fortunately, however, this stuff tastes so good that EVEN if you get it wrong somehow and your fudge doesn’t turn out absolutely perfect, it’s still going to be sinfully good to eat! Trust me, I know! I’ve personally ruined MANY a batch over the years. For the longest time, I even thought that I was jinxed and that I should just plain give up on trying to make this delicacy at home. 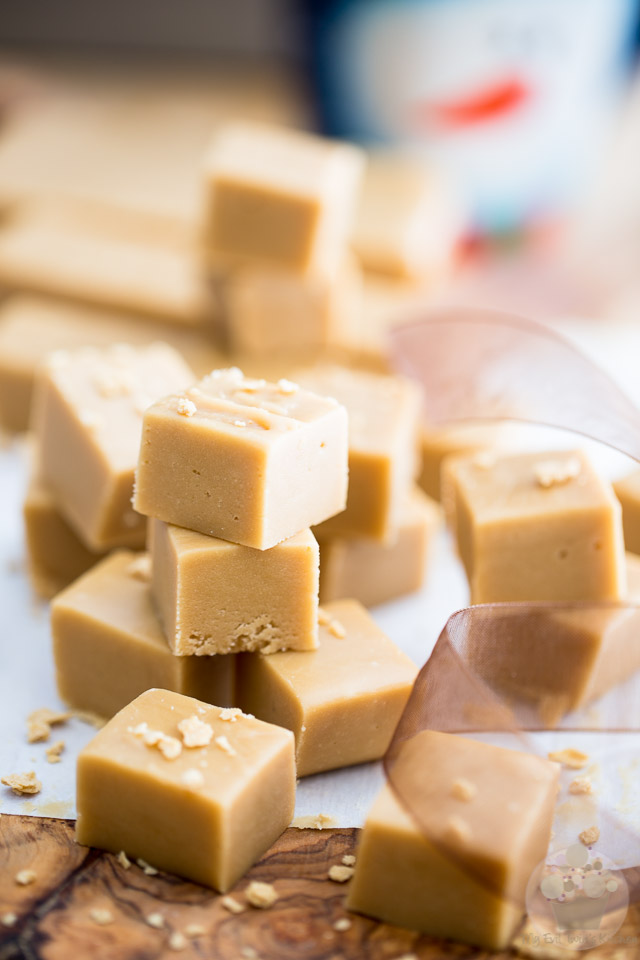 Sometimes, I’d end up with a “hard as rock” crumbly mess, sometimes I’d get fudge so soft, you could almost spread it on toasts…

But FINALLY, I found THE recipe, formula and method that works for me. I made 3 batches in a row this year, and all 3 turned out PERFECT!

Now I can only hope that it works just as well for you.. . 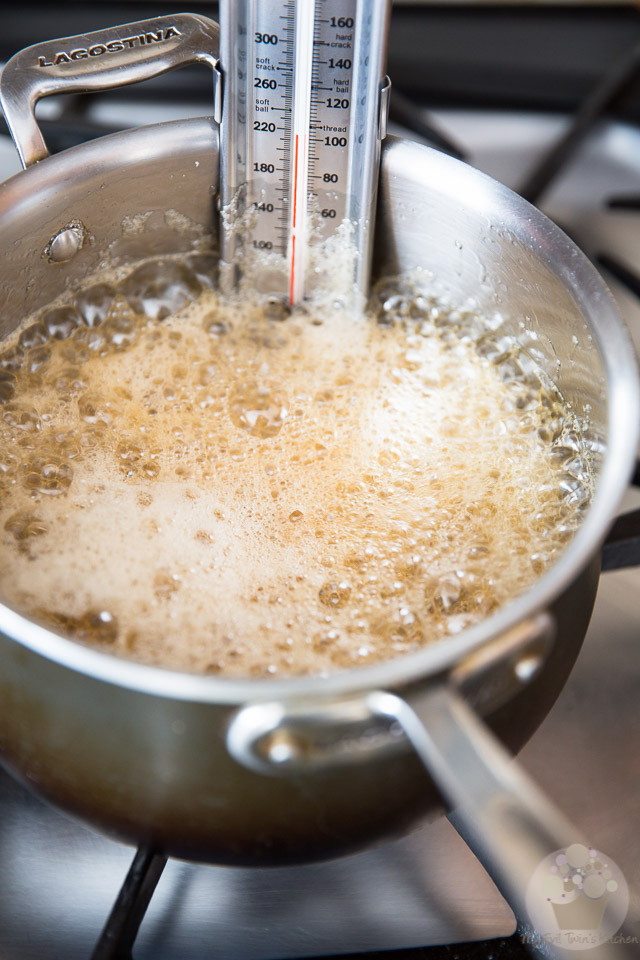 Start by greasing the bottom and sides of a loaf pan with butter, then line the pan with parchment paper, leaving a bit of an overhang on both long sides. Mind you, you’ll have plenty of time to do that later while your sugar mixture is boiling, but I always like to get that out of the way from the get go.

Then, in a 4 quart saucepan, bring the maple syrup to a boil over medium heat; simmer for 5 full minutes. 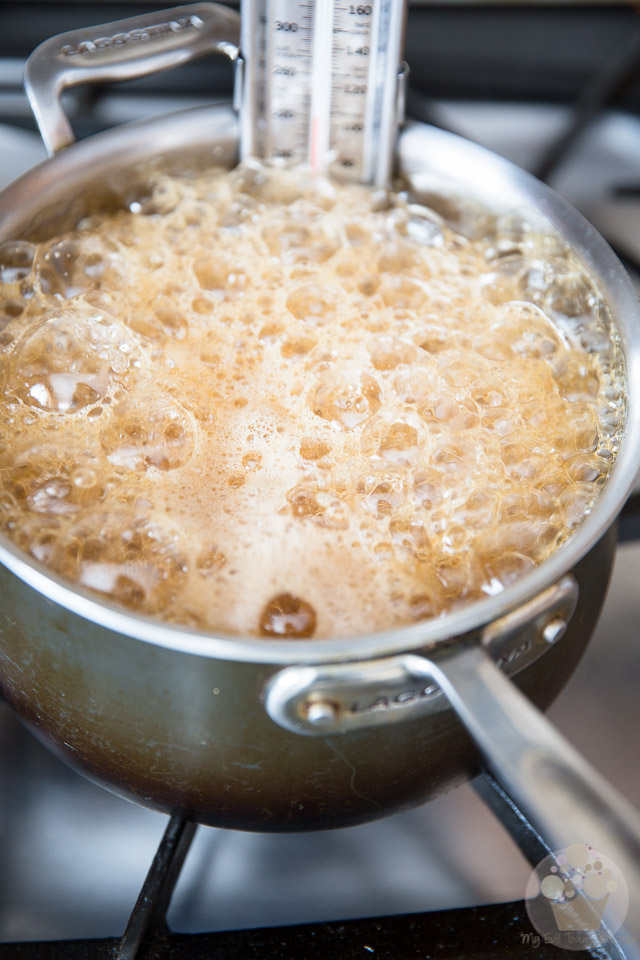 Make sure that you keep a very close eye on things (and that you use a big enough saucepan; 4 quarts is a minimum!) as the syrup will rise quite a lot as it boils!

The syrup shouldn’t boil over, but if you find that it’s getting too dangerously close to the edge, lower the heat a little bit, or carefully lift the saucepan by an inch or two for a couple of seconds… 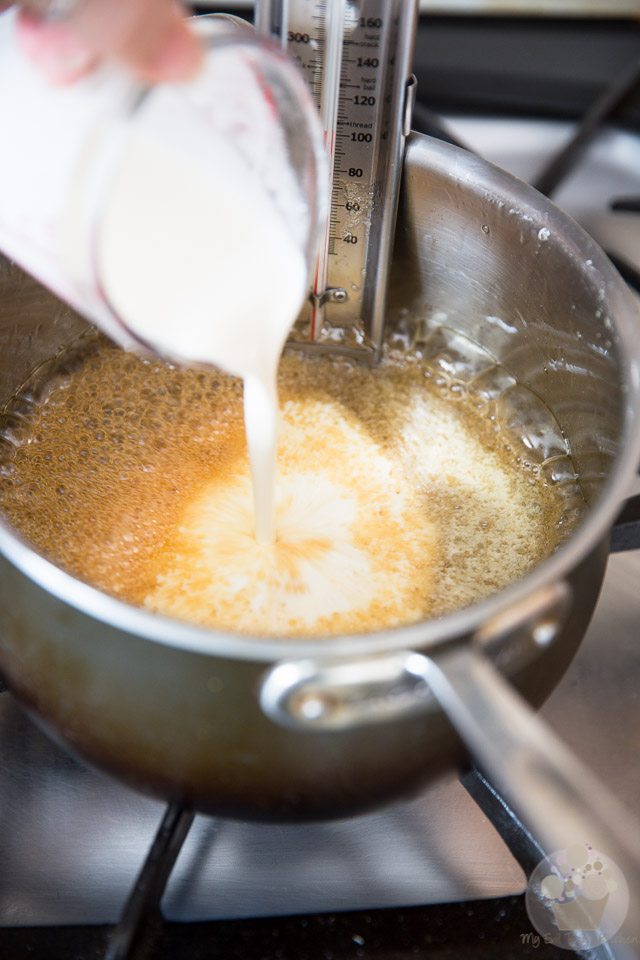 After 5 minutes, pour the heavy cream into the saucepan but do not stir it in; simply let the mixture get back to the boil, the cream will mix right in with the syrup on its own. 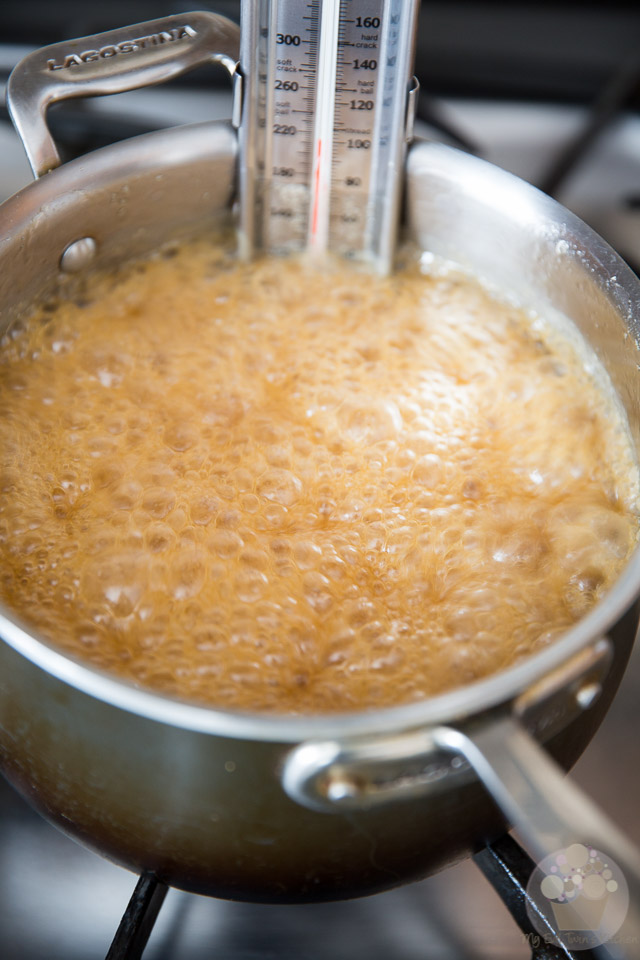 Again, keep a close eye on things as the syrup will rise this time too, although not quite as much as it did before.

Let the sugary mixture simmer without stirring until it reaches 236°F on a candy thermometer, which should take about 20 minutes.

It is of utmost importance that you get the syrup to just the right temperature here, so yeah, you absolutely need to use a candy thermometer, and a good one at that. You also want to make sure that your thermometer does not come in contact with the bottom of the saucepan, as this could falsify your readings. 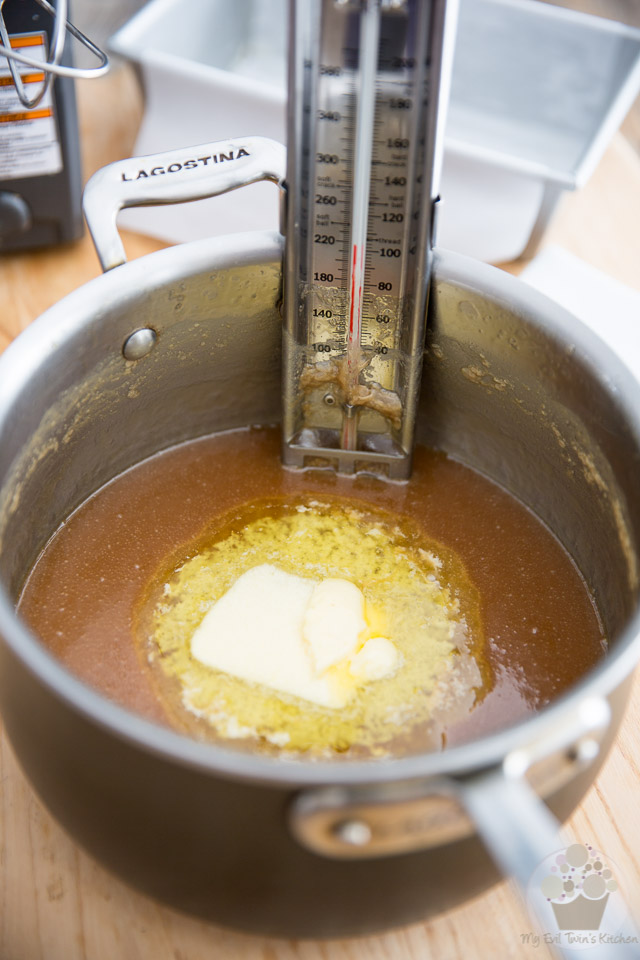 AS SOON as the sugar syrup reaches the magic target of 236°F, remove the pan from the heat source. As in completely remove it. Don’t just turn off the heat, that won’t be enough and your sugar will continue cooking more than it should.

Take that saucepan off the heat and add the butter to it, but do not stir it in. Just let the mixture cool like that for 8 minutes. 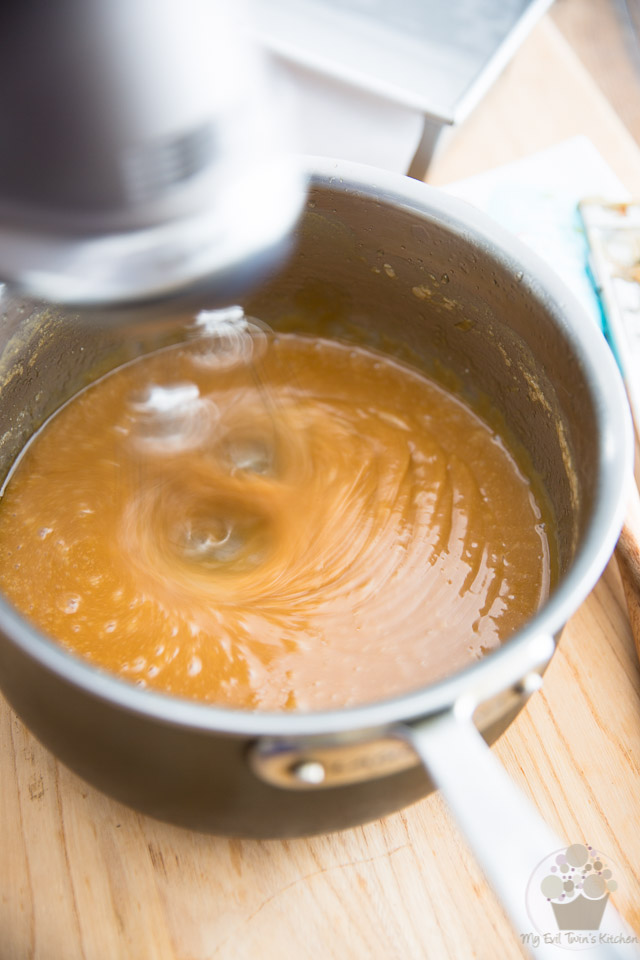 Now comes the step where you need to use your eyes and judgement. You need to beat some air into that sugar, just the right amount of air, and I can’t give you a clear indication as to exactly “how much” is the right amount.

I’ll try to help the best I can with a bit of visual aids and descriptions, though…

You’ll want beat your syrup with an electric mixer on medium speed for ABOUT 5 minutes, or until the sugar mixture gets thicker, lighter, looses most of its sheen and STARTS to show signs of crystallization. 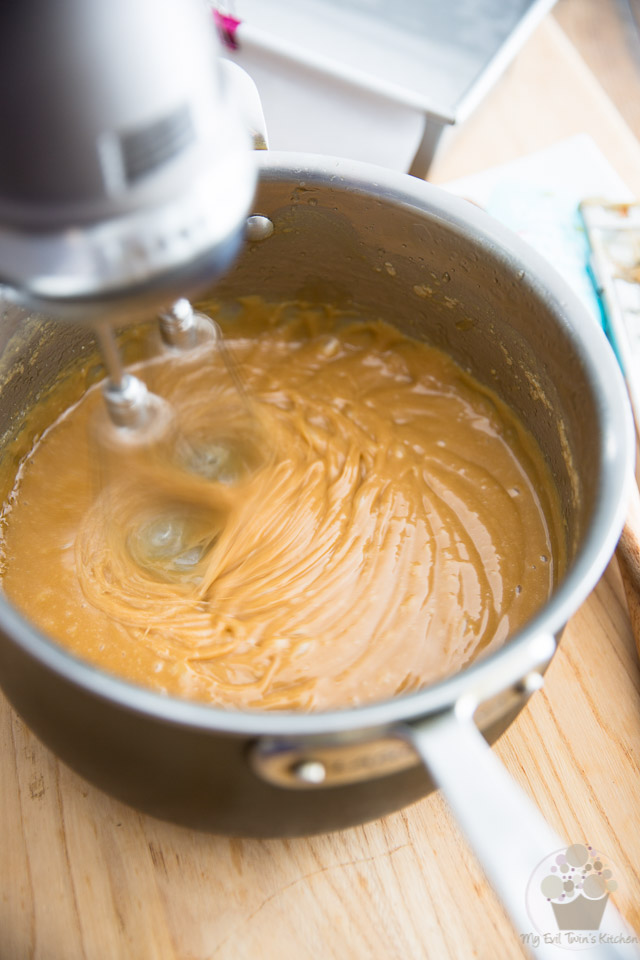 At first, the syrup will be a somewhat dark, glossy caramel color, but you’ll see that it’ll soon start to get lighter in color… 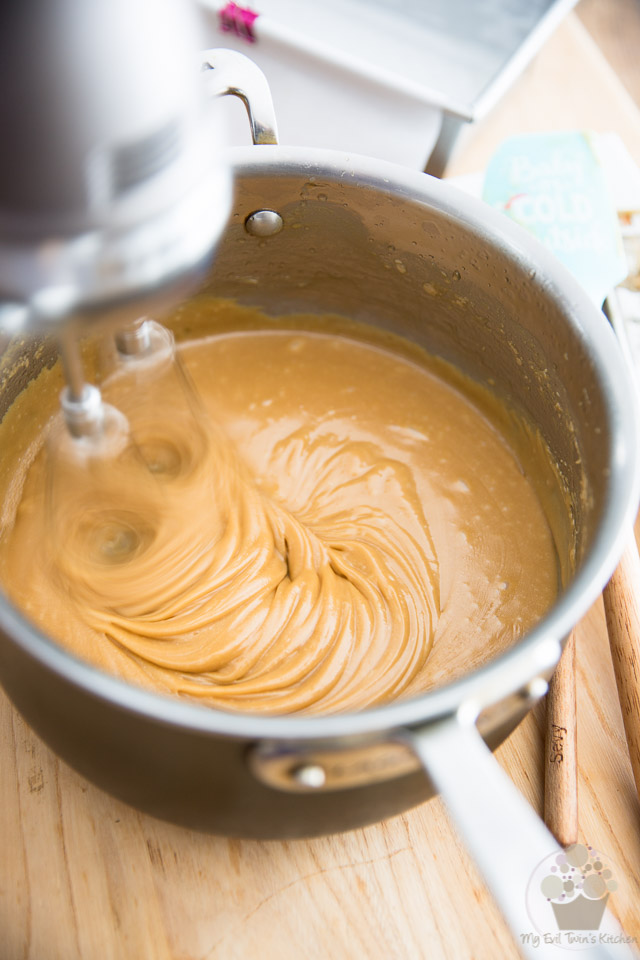 The more air you beat into it, the lighter the syrup will get, and then it’ll start to get thicker, too. The swirls will keep a much more well defined shape as the beaters turn into the mixture… 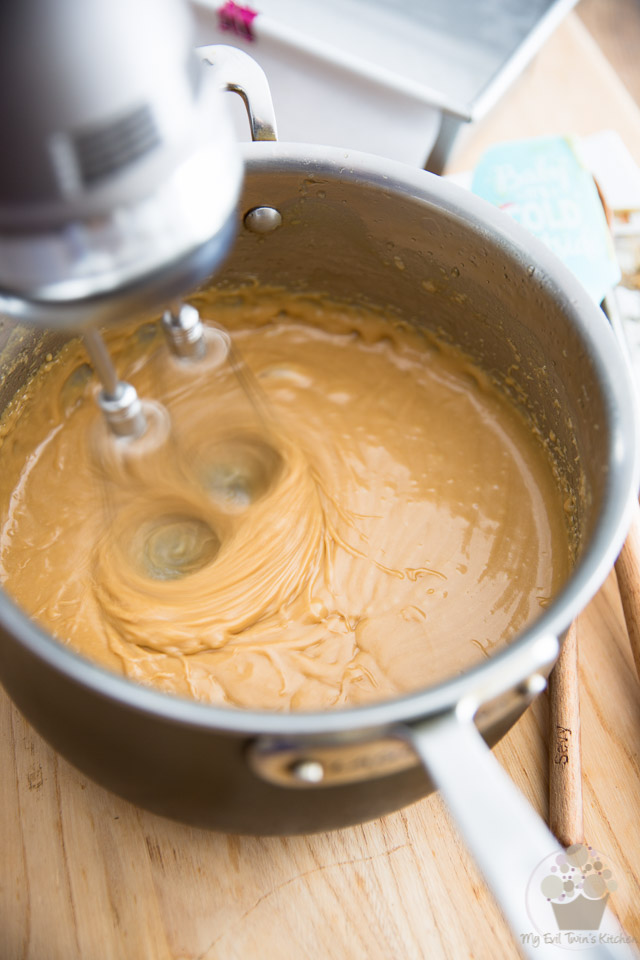 After another couple of minutes, the sugar will become even lighter and fluffier and thick, and it’s now slowly starting to loose its sheen. 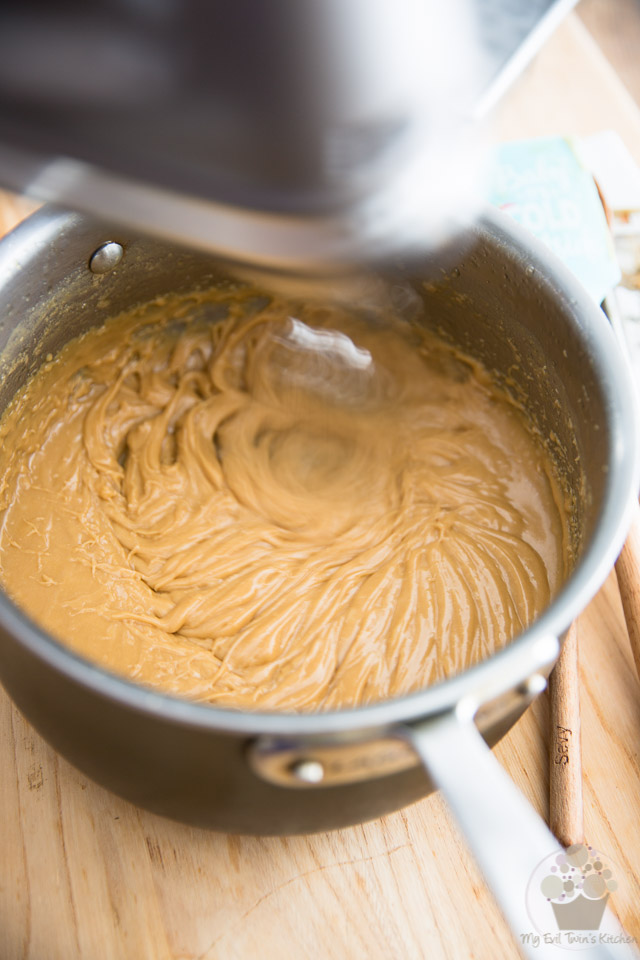 HA! This is the moment when you want to stop beating. Can you get a sense of how the sugar crystals are starting to form? The change in consistency is very subtle, but if you look closely, you’ll be able to see and feel it…

It’s imperative that you don’t overbeat the fudge at this point, otherwise it will turn to sugar directly into the pot and you won’t be able to pour and spread your fudge into your prepared pan. And then your finished fudge will be dry and crumbly. 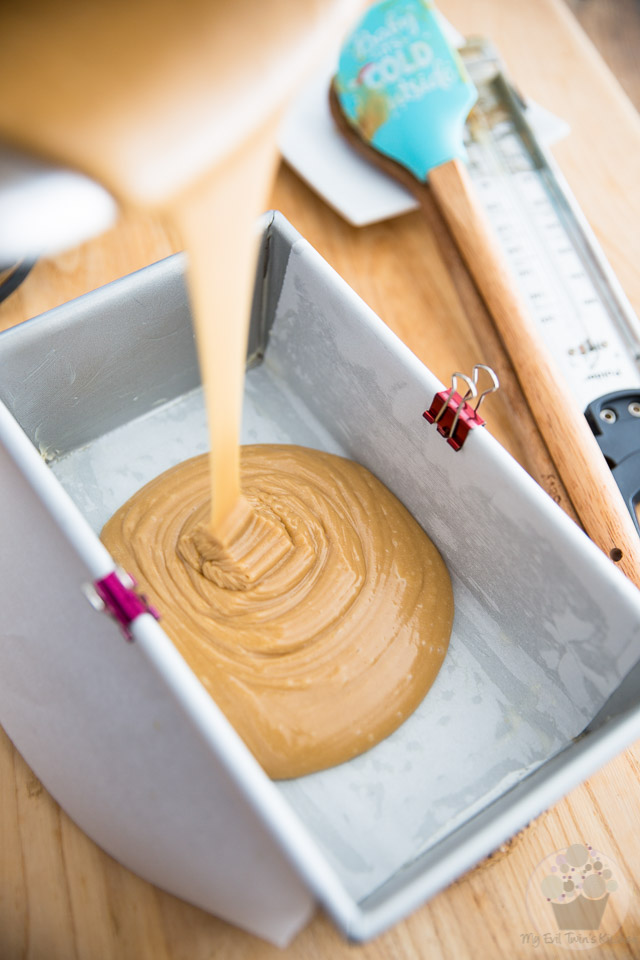 Your fudge should be thick but still somewhat runny when you transfer it to your prepared pan.

Oh, and you want to be prompt when you do that, too. If you waited too long, your fudge would start to set in the pot again…

As soon as you get it to the right consistency, pour it right in! 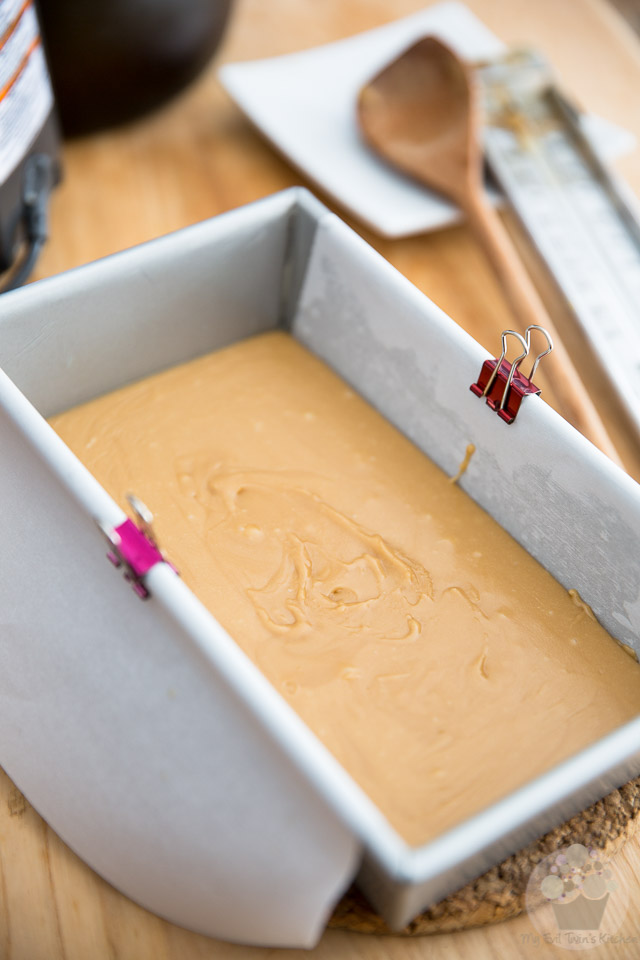 Now spread your fudge delicately all the way to the edge and place it in the fridge until it’s completely set, about 2 to 3 hours. 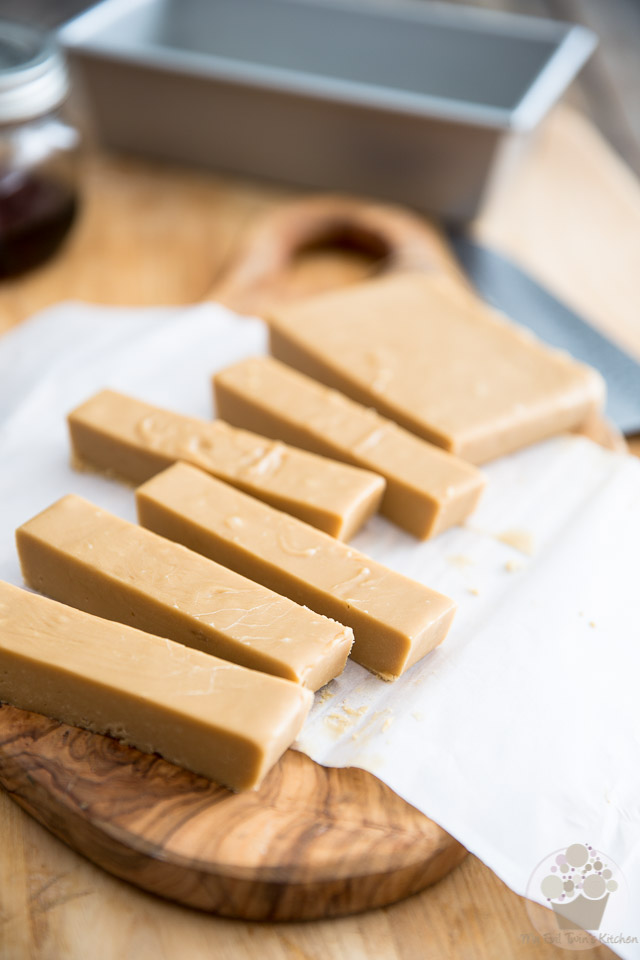 Then, delicately lift the fudge from the pan by pulling gently on the parchment paper. If it refuses to budge, let it sit at room temperature for a few minutes — this will help the butter that’s keeping the parchment paper in place loosen up a bit and let go more willingly…

Cut your fudge into 32 squares with the help of a sharp knife. I like to do 8 long strips and then cut each strip into 4 squares. 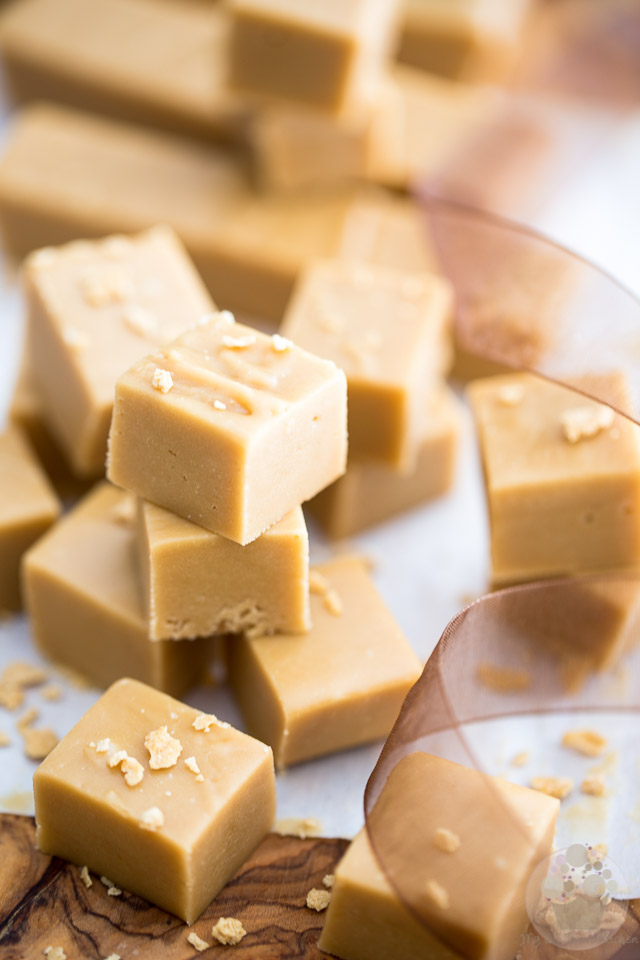 If everything went as planned, you are now looking at the smoothest, creamiest, most delicious Maple Fudge ever… And if things didn’t go exactly as planned, well, I’m sure that whatever it is you’re looking at is still and nonetheless incredibly delicious!

Just try not to eat the whole batch in one go. Unless you want to try your hand at it one more time. 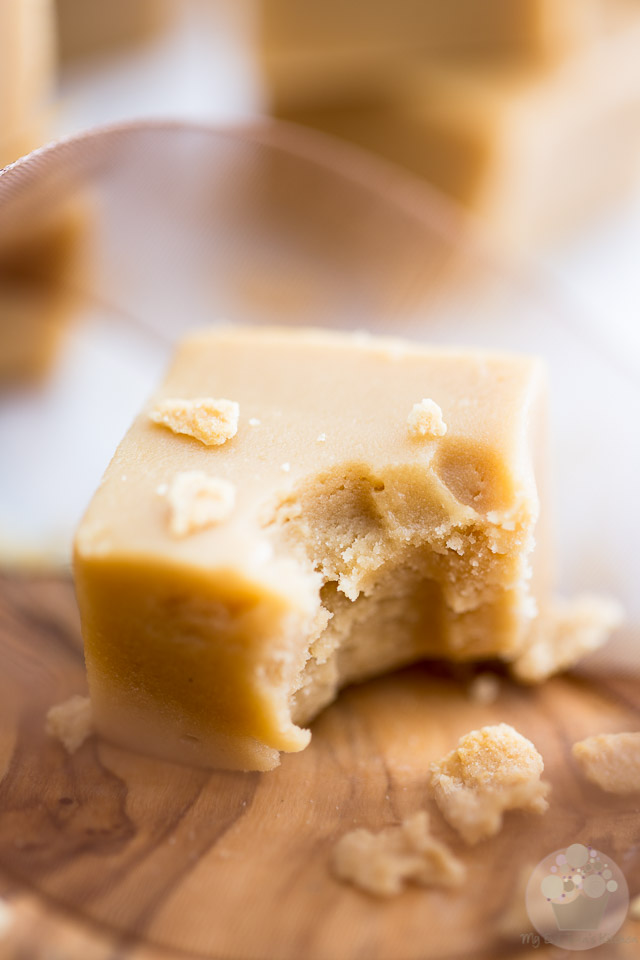 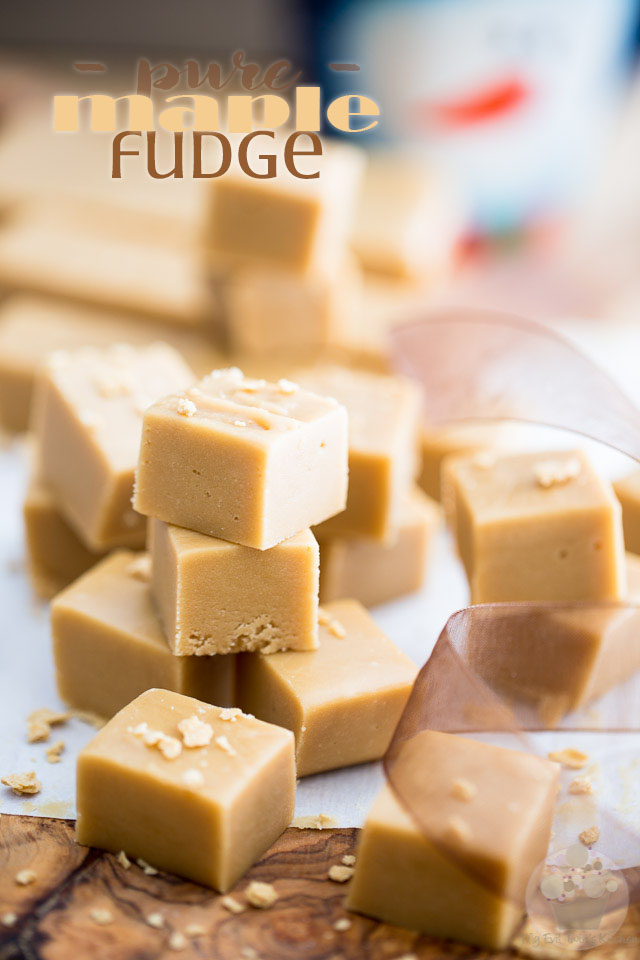 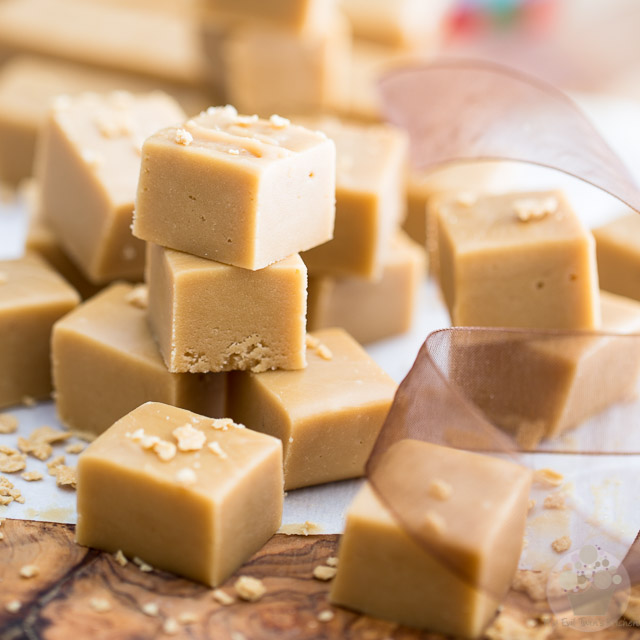 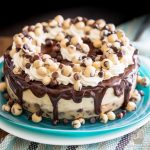 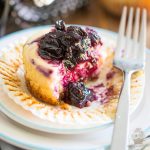 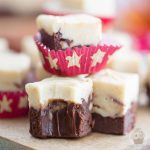 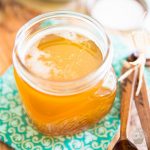